Jesuit Students’ Activities Outside of School 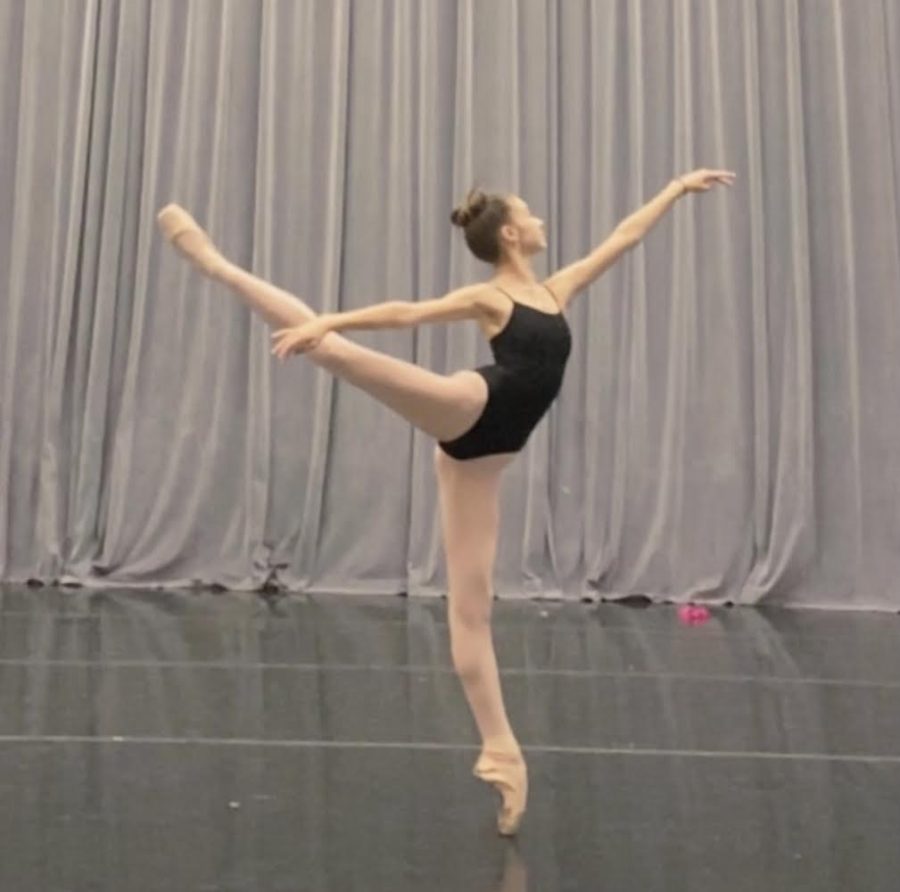 Elliana Kluherz, a Jesuit student who dances outside of school, doing ballet.

While Jesuit has many school-sponsored activities, many students participate in other activities outside of school.

Often these sports and activities conflict with Jesuit’s schedule and workload, requiring late nights or early mornings in order to participate. However, Jesuit students also find that these activities strengthen their abilities as students and people. Five Jesuit students share their perspectives on their participation in activities outside of Jesuit.

Senior Alex Amparo began participating in triathlon training and races during eighth grade. Since triathlon is a race composed of swimming, biking, and running, Amparo would often complete multiple workouts per day.

“I would have swim practice at 5 a.m. and then after school I would either have cross country, track, or bike practice,” Amparo said. “At a minimum, I would do two workouts per day, probably around four hours total.”

While Amparo did not compete in triathlon for Jesuit, he did participate in Jesuit’s cross country and track teams as a way to train for the running portion of his races. This unique situation allowed him to train both independently and with a high school team, allowing for a balance between school involvement and independence.

“I think personally it was better to have some separation between activities and school,” Amparo said. “I did still get to have that social aspect with running at Jesuit.”

Though Amparo has since retired from triathlon, while he was competing his training and education would conflict.

“Since I had to get up so early to go to swim practice and then go straight to school, I was always super tired during the first few periods of school,” Amparo said. “I would be absolutely exhausted by 6 p.m., and then I would still have homework to do since the rigor at Jesuit is super high. It did take a toll on me physically and mentally.”

Even with the challenges of balancing a non-Jesuit activity along with a course workload, Amparo found success in triathlon, competing in races across the United States and racing at the world championships.

A senior at Jesuit, Elliana Kluherz spends most of her time in a ballet studio or performing on stage. Dancing at the Oregon Ballet Theater, Kluherz has practice or rehearsal daily.

“In high school, I have practice for about three and a half hours everyday,” Kluherz said. “When we have upcoming productions, I have rehearsals more often as the show gets nearer.”

Kluherz’s participation in production means a huge time commitment, and sometimes she has to miss school in order to attend rehearsal.

“I have had to miss quite a few classes for rehearsal at random points in the day,” Kluherz said.

Along with missing class, Kluherz has had to put in extra time in order to stay on top of her assignments. Her participation in ballet productions has taught her how to manage her time well.

“The shows have been time consuming,” Kluherz said. “I’ve definitely lost some hours of sleep, but I think having time throughout the day to work on my homework, like during my prep period or flex period, helps me get a lot of work done at school.”

Kluherz has found that while some of her peers at Jesuit don’t understand her schedule or commitments, she enjoys the balance and separation that comes with participating in an activity outside of Jesuit.

“In a way I like how separate dance and school are because I don’t have to focus on one aspect of my life at all time, I have a little bit of variety,” Kluherz said. “I enjoy it because I love to dance and go to school at Jesuit, so it’s a good balance.”

Waking up around 4 a.m. every morning, senior Angie Cao trains for figure skating each morning.

Though figure skating usually doesn’t conflict with Cao’s schedule at Jesuit since she trains so early in the morning and competes in the summer, her early rising often leaves her quite tired at school.

“My training itself doesn’t conflict with school because there’s nothing going on at 4 a.m.,” Cao said. “But if I have a lot of homework and have to go to sleep later, then I’ll be really tired and practice and have trouble staying awake at school.”

Cao has been recognized as a gold medalist by U.S. figure skating, and she also travels out of state to compete. Finding the balance between skating and school can be difficult though.

“Skating and school do feel like two separate worlds,” Cao said. “Doing skating definitely requires a lot of balancing time commitments which can sometimes be hard, but I think it’s fun.”

In addition to competing in math, Mantri has used her skills to teach younger students, finding it important to make sure that younger girls especially have access to learning advanced math.

“I started teaching formally in seventh grade, so I used to reach third- to fifth-graders,” Mantri said. “I‘ve also taught middle-schoolers, and last year over the summer I ran an online summer program for middle and high school girls to introduce them to advanced math.”

Besides teaching, Mantri has also utilized her math skills to conduct math research.

“Over the course of the last calendar year, I worked on a research project and published a math paper,” Mantri said. “I got to work with a grad student from MIT and two other students my age to do original research.”

Mantri credits Jesuit High School for having a math program that has helped her develop her skills over the past four years.

“Jesuit has one of the most amazing math programs that I’ve ever seen,” Mantri said. “With the advanced math classes that Jesuit offers, there’s an opportunity to learn kinds of math that a lot of people don’t get to see until college or even grad school which is really special.”

Sophomore Grace Sohn is a part of the Portland Youth Philharmonic Conservatory Orchestra, playing the oboe, a double-reeded instrument.

“I have rehearsals once a week for four hours, and I have theory classes in a classroom setting in the middle of rehearsal,” Sohn said.

Long rehearsals mean that Sohn has to balance her time, staying at school and going straight to rehearsal in order to not waste time on a long ride home inbetween.

“I definitely try to work and plan ahead,” Sohn said. “But sometimes having a lot of school work the same night as rehearsal is just unavoidable because I might have a test the next day.”

Sohn uses her talents at Jesuit as well, participating in the school’s band. Sohn has also participated in Oregon’s all-state wind ensemble.

As the Portland Youth Philharmonic draws students from all over the metro area, Sohn enjoys the opportunity to connect with students from other schools.

“The Portland Youth Philharmonic is such a cool community to be a part of because people from all different schools come together to make crazy good music,” Sohn said. “It gives you a lot of experience in terms of how it feels to play in a group setting and how it feels to connect with other people through music.”