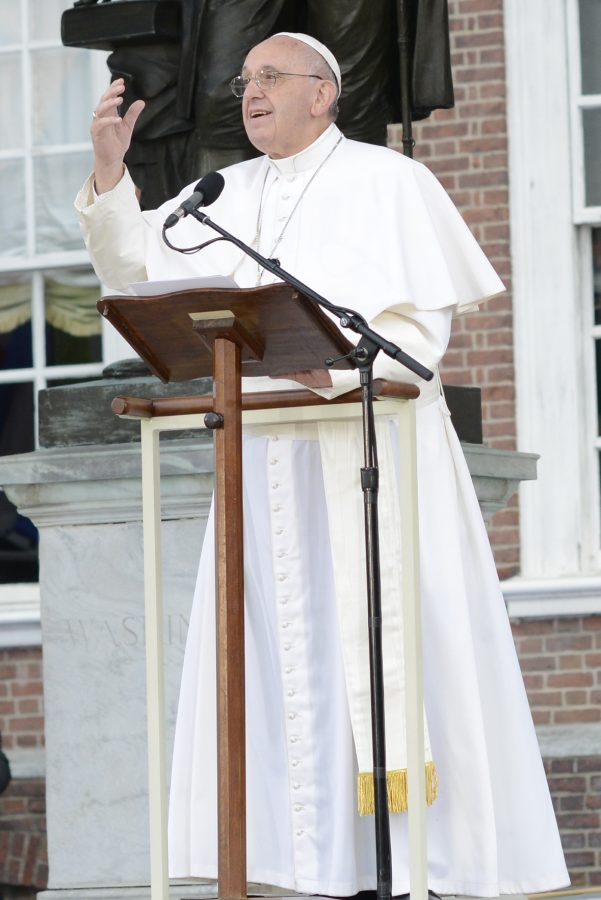 Pope Francis holds synod for changes in the Amazon

Oct. 6 marked the beginning of a special synod directed at making vast changes in the pan-Amazonian region of the Catholic Church. The synod, made up of selected bishops and various advisors, will conclude Oct. 27 with a closing mass lead by Pope Francis.

A synod is a special assembly of Church clergy and other individuals in the laity to decide upon issues of administration, doctrine, and application. At the end of this three week meeting, the Pope will approve a document listing the decisions made.

The synod, which has been in preparation since its announcement in 2017, will focus on issues of protecting the environment and exploited lands, inculturation and liturgy, migration, protection of water, human trafficking, forming effective communicators, access to preists, and women’s role in the Amazonian Church. Many followers believe this synod will be the hallmark of Francis’s papacy.

“This Pope is interesting, because he tackles relevant issues that haven’t been dealt with before,” senior Peter Murphy said.

Of the 200 participants of the synod, over 145 are coming from South or Central America. With the focus being on the Amazonian region, it is important that indigenous people remain part of this discussion.

Among the issues being discussed, the access people in the Amazon have to mass and the Sacraments is a top priority. In some regions, it is common for people to have mass with a priest only once or twice a year. One proposed idea is for older, possibly married, men, already ordained as deacons in the communities to be ordained. Additionally, the idea of women being ordained as deacons has again risen as a proposal.

There is controversy surrounding this idea, as many believe this topic should be discussed at a regular synod due to the potential effects and changes to tradition it would have on the rest of the Church.

The ordination of women has been in question for years, but many resist this idea as they argue it sways from Catholic tradition. However, there was a time when Catholic women could be deacons in the church and were included largely in the clergy.

In areas of South and Central America it is common that women are the leaders of communities. Ordaining women in the Amazonian region would allow these leaders to include the church more regularly in their communities.

“What happens if you’re in a position of leadership as a women [in the Church] and you do not have to report to a male at the end of the day?” Campus Ministry Director Don Clarke questioned. “How would that happen in the Church?”

Another main focus of the synod is the protection of the earth and the land in the Amazon. A key proposal includes the establishment of a “permanent observatory of human rights and protection of the Amazon” which would entail a new Church law directing the actions of Christians towards the environment. Another detail of this includes Catholic universities making a preferential option for the education of indigenous people (americamagazine.org).

Francis has made a point of encouraging people to be more environmentally conscious. He works to spread awareness of climate change, an issue seen clearly by people living in the Amazon region.

Pope Francis, a Jesuit, has been open to discussing more progressive ideas since he was voted into the papacy. He has spoken about topics such as gay marriage, abortion, and even possible schism. Francis is unlike many popes who came before him, and appeals to more young Catholics.

“Young people and young adults who follow what he says are edified, meaning there is some encouragement that the pope knows who they are, and wants them to be a part of the church,” Clarke said.

Since he began as Pope, Francis has tackled many corruption issues that also challenged previous popes.

“One of the things that the Pope really addresses is the issue of power and how the church has used and abused power,” Clarke said. “The Pope has said we can not keep doing this.”

After the synod concludes, proponents are looking to establish a permanent organization in the Amazonian region to implement the changes made by the synod.

The impact of this synod will be great within the Church, and the decisions made have the potential to change the way the Catholic Church operates.

“There are different times of excitement when it comes to the Church starting to move,” Clarke said. “For me I would say to people in high school this is unbelievably exciting because we’ve never really seen anything like this.”