March Artists of the Month 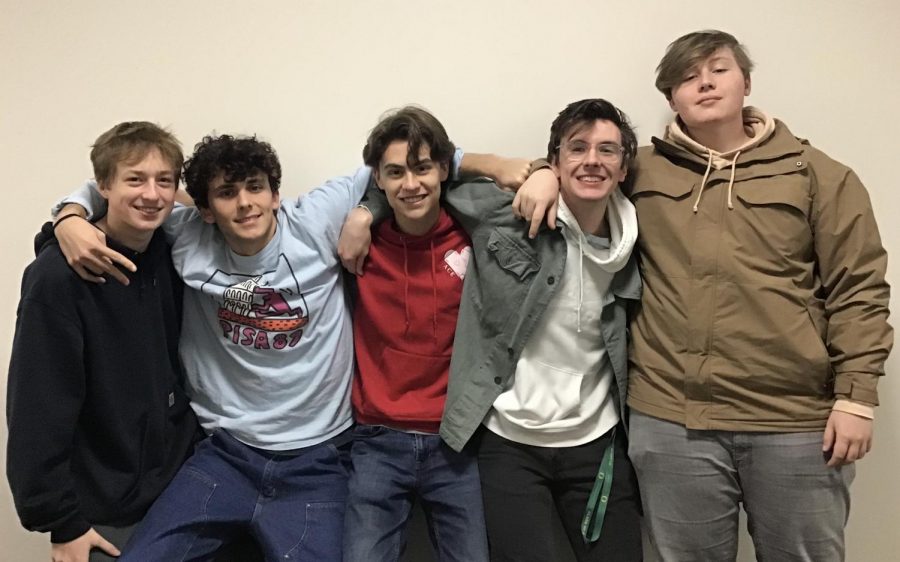 March Artists of the Month

“They inspire me because they are so inspired. There’s so much joy and love and honest inspiration that it’s contagious.”

When the talent abounds in your art class, how is a teacher to pick ONE artist of the month? Art IV teacher Sascha Manning has a solution: pick five.

Seniors Ben Morich, Kevin Wisnewski, Kyle Kneefel, Caz Barnum, and Charlie Wallace, who met in Manning’s Art I class freshman year, are all recipients of the title “March Artist of the Month.”

Each artist finds inspiration in nature as well as their surroundings.

So, how did their art careers begin? Barnum said, “I got started in art in middle school. I was doing little doodles and people would say ‘Oh, those are really good’.”

Wallace, Wisnewski, Kneefel, and Morich agreed that their stories were similar to Barnum’s. All took an interest in art during middle school, and eventually showed their art to Manning for a chance to enter Art I.

Years later, each artist still finds comfort in art, even during their hectic and stressful senior year. Outside of class, these talented young men find time to work on art projects on which they are passionate.

Wisnewski said, “Outside of class, I like to paint [on] shoes for people. I’ve been selling painted shoes since freshman year.”

Added Barnum: “It’s very hard for me to find time outside of school [to do art] because I’m doing a lot of stuff, but on big breaks I do art.”

Then, Manning chimed in with a question: “Did you ever have the sense that art is just for girls, or that you have to be a comic artist to fit in to the stereotype [that all male artists are graphic novelists.]?” to which the boys nodded.“

For me, there’s always been outside influences that say, ‘Your art has to be this way,’ and for a while I thought that way,” said Kneefel. “But as soon as I got into eighth grade and high school, it was like, ‘It’s my artwork. I can do whatever I want to do.’”

The energy that these artists generate is contagious. Each brings life and vibrancy to their work.“They inspire me because they are so inspired,” said Manning. “There’s so much joy and love and honest inspiration that it’s contagious.

When asked how they would describe each other, Wallace said, “Kevin and Ben and Kyle and Caz are crazy.” Kneefel called Wallace a “hype beast.”

When asked if they had any stories they wanted to tell, Manning immediately said, “How about the great flood freshman year?”

There were audible groans from Kneefel (“Ugh, that was my best project!”) and exclamations of “Oh yeah!” from Wallace, Wisnewski, Barnum, and Morich.“

Because we had so much snow, and the [Performing Arts Center] roof is flat, we had a flood in here to where there was a good amount of water on the floor,” said Manning. “[The class] had already invested a good four weeks into their artwork, and the great flood took down the majority of their [acrylic paintings].”

This flood, which seems to have brought the artists together the way only a natural disaster can is something the artists and Manning will remember forever.

Do these artists see a future in art? The answer for all of them is yes.

Well, almost all of them.

Barnum seems to have a different agenda than the other artists.“I’ll still do art, but …” Barnum said. Manning then chimed in: “You know you want to be a history teacher,” she said.

“Mr. Barnum,” said Wallace, at which all the boys laughed.

Caz Barnum is fascinated by oil painted landscapes, which are inspired by famous artist Bob Ross.