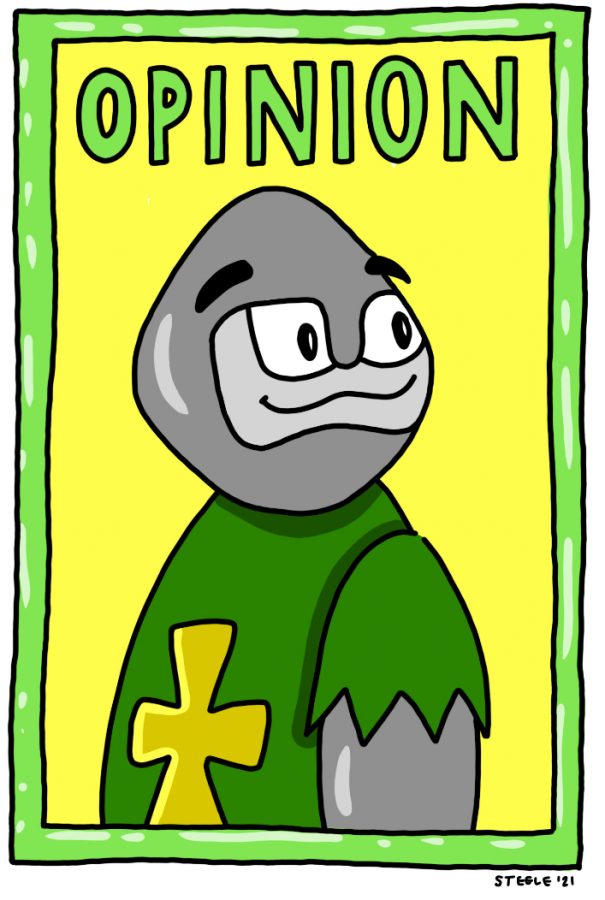 Charlie Crusader has been the figurehead for Jesuit High School for 65 years. While the image of Charlie has become synonymous with the school’s name, recently, there have been negative connotations surrounding the history of Crusader, and whether or not Charlie represents the values of a Jesuit education. Staff Editor Reet Chatterjee and I weighed the positives and negatives of Charlie’s presence at Jesuit; in order to avoid inserting personal biases into our work, we picked sides out of a hat. —Steele Clevenger, Editor-in-Chief

For over 65 years, the Charlie Crusader mascot has been associated with the values of Jesuit High School, Portland. Although the Crusader name has come under scrutiny recently, the Jesuit community holds the potential to redefine what it means to be a Crusader in today’s world. There’s an important distinction between a crusader utilizing biblical language to fulfill a fascist agenda, and a Jesuit Crusader utilizing their education to serve as women and men for others.

At the Mascot Listening Session in December, one student suggested keeping the Charlie Crusader mascot for its ties to the school’s dominating athletics program. Jesuit High School has a strong footprint in the athletics department, even receiving the title of the top-ranked high school athletics program in the nation. According to the student, Charlie Crusader is a symbol of Jesuit’s strength in sports, and changing the mascot would alter the perception of Jesuit’s athletics department.

Charlie Crusader is about growth, resilience, and service. Even if hate groups taint the crusader name, the Jesuit community holds the potential to redefine what it means to be a crusader with the Charlie Crusader mascot.

Charlie Crusader Should not Remain as Jesuit’s Mascot

Charlie the Crusader should not continue to represent Jesuit High School, and should, ultimately, be replaced by a mascot which reflects Jesuit’s core values.

As freshmen, Jesuit students are educated on the five pillars of a Jesuit Graduate at Graduation: Open to Growth, Intellectually Competent, Religious, Loving, and Committed to Doing Justice. The Crusader, known for its religious persecution of Muslims, no longer symbolizes Jesuit’s core values of becoming open to growth or committed to doing justice, as the Jesuit High School community does not tolerate violence or persecution of those who do not share their same views.

Additionally, Charlie the Crusader is not an appropriate representation of the Jesuit community due to the violent history of the Crusades, and the image of an intolerant mascot may not appeal to incoming freshmen who have struggled with religious oppression. The Ku Klux Klan has also associated itself with the Crusader name in the past, using the name as a title for the white supremacy group’s newsletter. This is harmful to Jesuit’s reputation as a safe and welcoming community.

If the Crusader were to be replaced, the new figurehead for Jesuit High School should reflect Jesuit’s loving and welcoming community, as well as its fighting spirit. The name Crusader could be interpreted as Christian superiority, which is not an accurate depiction of Jesuit High School and the student body. Jesuit strives to include all religions and cultural backgrounds.

Education on the history of the Crusades is necessary if we are to keep our current mascot, but it may never lose its negative connotations. As one speaker at the Mascot Listening Session pointed out, Jesuit students and staff can still be good people without the Crusader as the school’s image. Other names for a Crusader which do not imply religious intolerance and reflect the Jesuit community’s openness to growth and commitment to doing justice include: Pioneers, Knights, and Warriors.