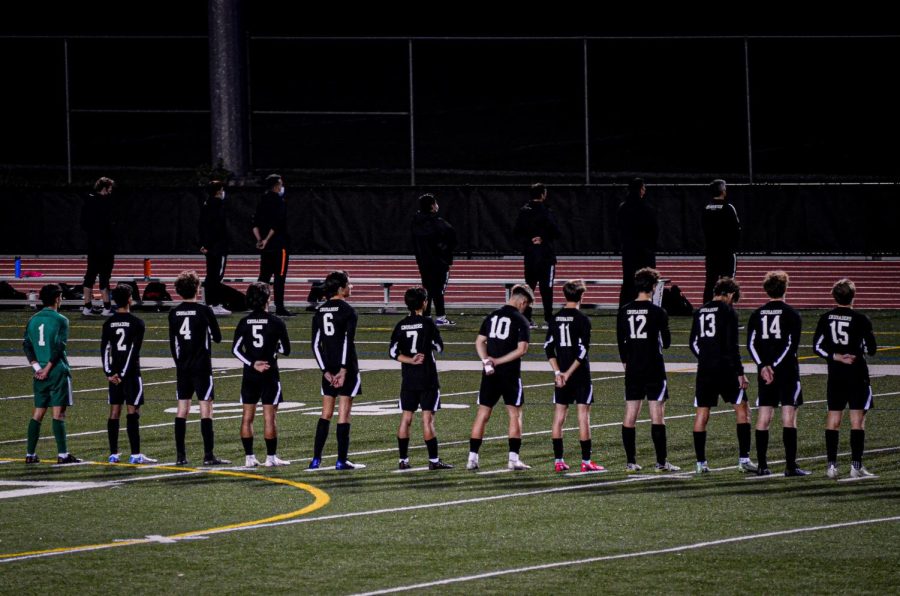 Men’s varsity soccer finished with a record of 14-4.

After a season of restrictions, men’s varsity soccer returned for a full season. The Crusaders wanted a deep run into the playoffs since winning their last state championship in 2018. Coach Skipper reflected on his excitement to have a full season.

“As fun as last season was, it was nice to play for something,” Skipper said. “This year we played for each other and a state championship.”

Although the Crusaders were ready to get back on the field, the team took some time to adjust with its newest players. In the first eight games, they had three losses, falling to Summit, Franklin, and La Salle Prep. Yet, they kept a strong mentality to persevere and view the losses as a learning experience.

“We took the games with us,” senior Spencer Carle said. “It helped us build for better results, and put a chip on our shoulder.”

Coach Skipper also reflected on the start of the season for his team.

“It always takes a while to figure out who plays where, who fits in where,” Skipper said. “But it also takes time to build team chemistry. I wasn’t too concerned about the early losses, because I knew it was a good group of kids, and that they would bounce back.”

These losses proved to help the team, as they went undefeated in the Metro League. At the end of the regular season, their record improved to 11-3. Multiple players were critical in maintaining their winning form.

Top scorer junior Drew Pedersen was arguably the Crusader’s most important attacking player, scoring 19 goals. He was also nominated as the Metro Player of the Year. In close games, he was often the man to score critical go ahead goals.

“Drew was really special, he’s one of my favorite players I’ve ever played with,” Carle said. “I feel that our connection was really good this year.”
Seniors such as Landon Azevedo and Luc Insley were also attacking players that helped lead the team with their playmaking. On defense, Brady McClellan held the backline together and provided leadership.

“Brady at the back was really an anchor for us,” Carle said. “He didn’t let people get in behind very easily.”

As playoffs began, Jesuit were favorites as they finished first in Metro League. They won their first three playoff games, scoring 13 goals, and conceding none. Their best display was against #7 ranked Lincoln, winning 4-0 on Cronin Field.

In the semifinals, they faced #6 ranked West Linn. Although Jesuit dominated for most of the game, West Linn grabbed a 1-0 win to stun the home crowd. It was a heartbreaking way to end the season for the Crusaders, after such strong performances in the playoffs.

Coach Skipper looks to next season as another opportunity.

“There are some really good players on JV this year that can step up next year,” Skipper said. “I’m not guaranteeing anything, but I’m really looking forward to next season.”