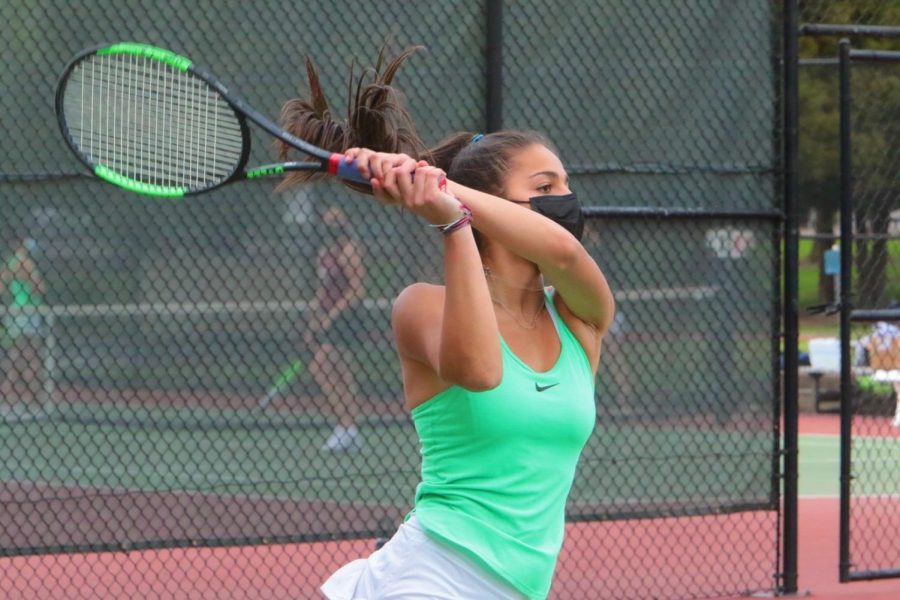 The women’s varsity tennis team will strive for a state title, with their first opponent being Barlow.

For the first time since the 2019 season, women’s tennis will be returning for a full season. Due to last year’s restrictions, the only opponents they played were Metro League teams. This year, they will look to extend their dominance and continue their reputation as one of the best teams in the state.

At the conclusion of last season, there were seven seniors who left the team. All of them played a pivotal leadership role in welcoming the new players.

“My seniors last year were fabulous, they really helped my freshman feel a part of the team,” varsity coach Kirsten Ruchaber said.

Even with the loss of these players, the expectations for this season are unchanged. A varsity singles player, Mishi Batinkova, emphasized the new mindset of this season.

“The team needs to work harder this year because of the seniors that left,” Batinkova said. “We are definitely going to have a very new team, but our goal is to still win the state.”

Coach Ruchaber also talked about her perspective for the season.

“I’m looking forward to a positive and fun season with the team and hope to continue from the success from last year,” Ruchaber said. “I’m also excited to build on the new freshman that we have.”

The women’s tennis team also has a changing theme throughout the season. Each week, there is a word or theme, centered around the core covenants.

Jesuit are also prepared for tough matchups in the season.

“Last year, our toughest opponents were Westview and Sunset as we didn’t play outside of the Metro League because of Covid,” Ruchaber said. “We are looking forward to some out of league play, especially at the Roseburg tournament this year.”

To defeat these opponents, the team will need help from some of their best players. Gracie Rask, Isabel Crespo, Stella Eastman, and Libby Day are seniors that are vital to the team’s success.

“Our seniors this year are players that help lead the team,” Batinkova said. “They are usually our captains, and a lot of the underclassmen look up to them.”

Mrs. Redding is one new coach joining this season. She will join as Ruchaber’s only assistant coach on the team.

As the varsity team strives for a state title, the women’s tennis program also looks to improve their younger players. These players may be prospective varsity players for the future. Batinkova emphasized the importance of underclassmen.

“The new players are going to set the tone for the next few years,” Batinkova said. “It’s nice to have new faces, and see how they handle themselves as they progress.”