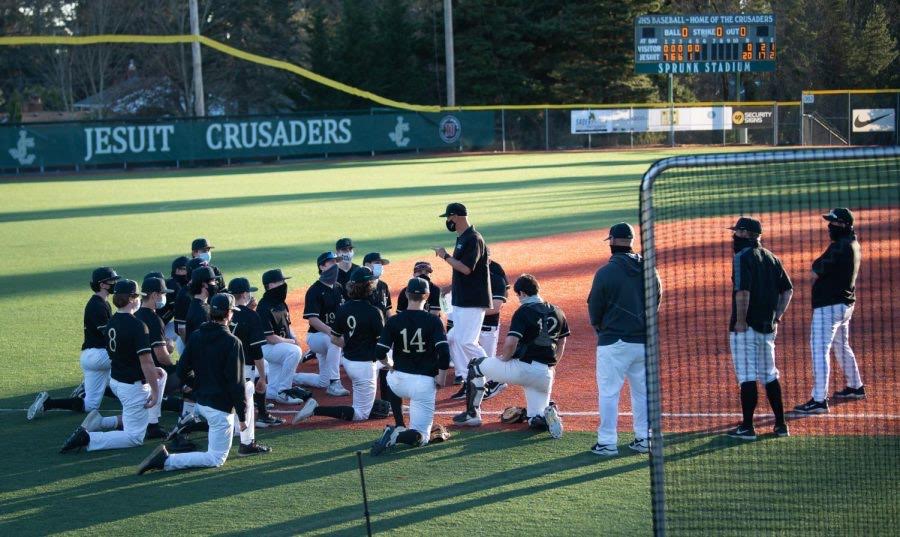 Baseball will begin their season against South Salem at Willamette University.

After a long wait, the defending state champion Jesuit Crusaders are ready to try to win another championship. With everything that has happened in the last two years, baseball has been affected the most out of all sports. They have not had a full season in the last two years.

Additionally the team lost many seniors last year. Those include Sean Murphy, Brody Marler, Max Lavey, and Kade Hidlreth. All five of those seniors had a very difficult task last season.

“Our seniors had a tough task to hang on to any legacy they can and pass it on,” Head coach Collin Griffin said.

This year, the team is trying to bring back what playing Jesuit baseball means. All of the players have worked very hard in the offseason to be ready when the season starts.

“We have been practicing every day and on our own time,” junior Charlie Sturm said.

The team’s main theme has been trying to play Jesuit baseball again. Jesuit baseball is the idea of playing as a team and kids from all around coming together to play as a team. Covid has made it hard for this to happen, but the team is ready to bring the philosophy back. Griffin shared that the team breaks every day by saying “who are we” as a statement.

“The coach’s expectation has been to get these kids back on track to understand what it means to play Jesuit baseball,” Griffin said.

Jesuit has a very difficult schedule this year. Griffin shared that every opponent they play will be a tough game because of how much better the players in Oregon are now. He pointed out that throwing 90 miles per hour is a new normal and that almost every team has that guy. This will make Jesuit’s path to winning a state championship difficult. However, the team feels confident and ready.

“The level of baseball in Oregon has grown,” Griffin said.

The coaching staff is coming together well. Griffin made a couple additions to the freshman teams but besides that he is bringing back his same coaching staff.

“The staff is about the same besides that,” Griffin said.

The people who need to buy in most to Jesuit baseball’s values are the freshmen. The freshmen in any sport are the future and the players are key to the team’s future success.

“Their job is to understand what it means to come from different teachings and buy into our philosophy,” Griffin said.