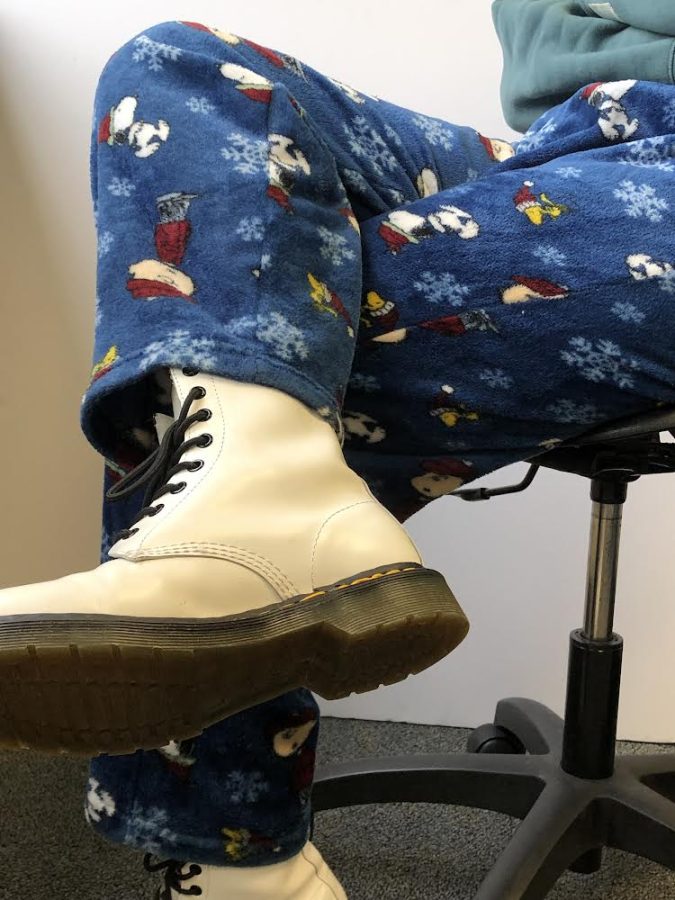 As students returned to school after the pandemic last year, the Jesuit dress code was relaxed allowing students to wear leggings and sweatpants for the first time. In late winter 2022, students were warned if dress code infractions did not end the changes to the dress code could be reversed.

In recent years, school dress codes across the country have encountered criticism for stifling student expression and perpetuating sexist and outdated gender norms. With so much widespread criticism regarding the topic of dress codes, should Jesuit reconsider the implementation of its own dress code?

Personally, I think not. As defined in the Student Handbook, Jesuit’s dress code is designed to “reflect respect for the dignity of self, other individuals and groups, and promote effective learning and social environments”—and it has proven to be effective in meeting those goals.

Many anti-dress code sentiments stem from the idea that dress codes prevent students from expressing themselves stylistically by limiting what they can and cannot wear. While it is true that students cannot wear certain types of clothing to school, with the new addition of sweatpants and leggings to the dress code, students have many chances to express themselves while simultaneously following the parameters of the increasingly flexible dress code.

More specifically, dress codes teach students to express themselves in ways that are appropriate in their environment. While many rules outlined in the dress code set clear structures for what you can and cannot wear, some rules are vaguer and more open to interpretation, allowing students to exercise their own judgement and discernment in deciding what to wear. In other words, Jesuit’s dress code allows students to practice using their knowledge of Jesuit and the dress code to make decisions regarding their personal expression.

In addition to suppressing student expression, critics of dress codes commonly argue that dress codes unfairly target female-presenting and minority students. Regarding allegations of inequality, the student handbook clearly states that “the administration may grant exceptions [to the dress code] for religious, cultural, or health reasons.” Thus, if students have frustrations with certain aspects of the dress code, they are more than welcome to get exceptions for those rules.

While some may argue that the dress code unfairly violates students’ self-expression, when students enroll at Jesuit, they sign a form agreeing to follow the school rules outlined in the handbook—including the dress code. No student is subjected to the dress code against their will, because all students sign that form.

Furthermore, as a Catholic, college preparatory institution, Jesuit has an interest in upholding its reputation for professionalism, decorum, and sophistication, even among the attire of its students. Additionally, it is important to note that students who find the Jesuit dress code creatively stifling will have plenty of opportunities to express themselves with their clothing over weekends, breaks, and spirit days, providing them with time to develop their personal style while they attend jesuit.

Finally, even if students remain dissatisfied with the restrictions of the dress code, once they graduate, they can seek out other environments that align more closely with the clothing and forms of expression they wish to employ.

The Jesuit dress code provides four years of well-intentioned guidance on formulating personal style within the confines of an environment that requires a dress code, something most people will encounter later in life. There is value in learning to dress to a certain standard of professionalism and dignity at a young age. So, while the dress code may remain unpopular amongst students, it teaches students valuable lessons about creativity, adapting to different environments, and professionalism. Therefore, the dress code should remain implemented in some form for years to come.

Jesuit calls itself a college preparatory institution. So judging by that metric, should the dress code not prepare us for what we will expect in college and the ever-changing workplace environment?

One common reason for having a dress code is to prepare students for professionalism that will be required later in our lives. However, the guidelines around what is considered professional are becoming more relaxed and accepting of less conservative clothing and hairstyles. Things like additional piercings, unnatural hair color, and casual clothing are becoming less taboo in the workspace especially after the pandemic where people became used to staying at home (Worklife). Even traditionally conservative industries such as banking have shifted their expectations.

“When people can be themselves, they do their best work,” John C. Williams, president of the Federal Reserve Bank of New York said to the New York Times.

With these cultural changes in mind, is the dress code at Jesuit really preparing us for our future?

Secondly, while the mission of Jesuit High School is to prepare us for college and beyond, we are still teenagers, not office employees. Why should we be expected to act or look like full-fledged members of the workforce?

Teenage years are the time when people figure themselves out, including experimenting with our appearances: what clothing we feel comfortable with and how we want to be perceived. Yes, this will mean clothing might be volatile as students find their sense of style, and yes, clothing might become slightly more revealing. However, making some fashion mistakes we will regret when we look back on them is a natural part of adolescence.

The Jesuit community, a family in itself and full of love and support, should also be a place where we can feel comfortable exploring and making mistakes. Students should be given the opportunity to experiment with their clothing without excessive restrictions even if that means coming to class in a shorter skirt or with an unnatural hair color.

Most adults do not dress the same as they did in their adolescence, so being allowed to wear more revealing clothing as a young person will not affect someone’s ability to convert to more formal and conservative clothing later on. If a student decides to pursue a career where professional clothing is required, they will have plenty of time to adjust to that when the time comes. It should not be that much of an adjustment if it comes during a stage of life where people typically change their attire anyway.

In fact, college is closer in proximity to when people will have to wear professional clothing, yet most colleges do not feel the need to enforce restrictions of students’ attire. Students who have internships and jobs during their time in college are also able to transition to clothing appropriate for that opportunity without needing a dress code to tell them how to do so.

Lastly, there is no evidence that wearing more conservative clothing has any effect on a student’s performance inside the classroom. A student wearing a crop top has no less intelligence than a student who is wearing a full length shirt. Yes, more revealing clothing can draw more attention; however, so can clothing that is bright and colorful (which is not restricted).

In a world full of distractions, I think students should learn how to accept that something might grab their attention for a moment but then learn to refocus on what they are doing. Students should not expect their lives to be distraction free–because they will not be. Even the most professional workplaces will be full of interruptions and tempting technology. Teaching us to learn how to focus even with distractions is far more effective college and life preparation than giving us a distraction-free environment. Thus, as a self proclaimed college preparatory school, Jesuit High School should shift away from a strict dress code.