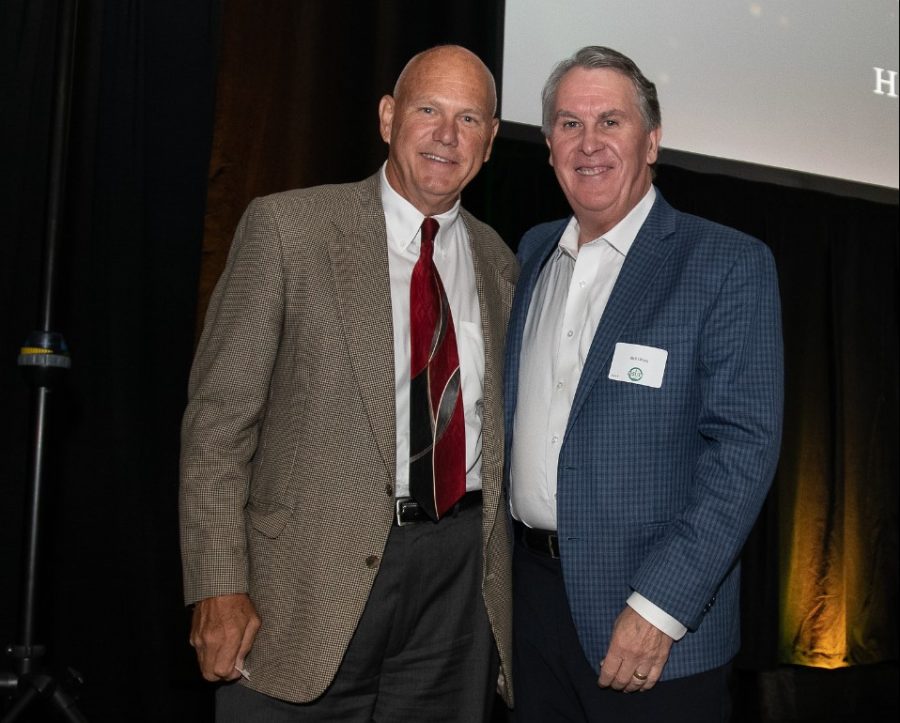 A member of the Booster Club since 2007, a public address announcer, and a founding member of JCTV, Steve Mueller is a valued mentor and coach.

Question: Can you state your name and title here at Jesuit?

Answer: Well, I have no title. I wear a lot of different hats. First of all, my name is Steve Mueller. And I don’t have a title. I mean, I just got my blue ID badge yesterday and it says “staff”. So, you know, whatever that means. But I coach football. I volunteer as a mentor to JCTV. I have worked in the cafeteria as a cashier. I announced men’s varsity basketball, JV and freshman basketball as well. And I do varsity baseball for the men, I also help with the equipment for the varsity football team. Yeah, lots of different hats.

Question: What have you learned from being a coach and a mentor here at Jesuit?

Answer: I would say, seeing the phrase men and women actually develop in front of you. In other words, when you coach freshmen, they’re brand new, and you have this group of kids that wide eyed and learning everything and they got school, they got academics, they got sports and all this stuff go on. Then you follow them through their four years of Jesuit and you see them grow into these magnificent young men and women. And it’s not necessarily just a phrase men and women for others, but you see it developing the students and then you see the students come back when they’ve graduated and they have done magnificent things with their lives, whether it be their career or volunteer or whatever they’re doing. And it’s just incredible just how successful the students have become. You take it from their freshman year all the way to their senior year and beyond. It’s just remarkable. And that’s what I’ve learned. I’ve just learned to just watch and observe all the wonderfulness that’s out there with the kids and it’s just remarkable.

Question: I love hearing about your ability to watch people develop because as someone who is going through that development, it would be really interesting watch it from that outside position

Answer: Well, many times you don’t really know what’s going on. So, later and you look back and go, Oh my gosh, there I was as a freshman, I can’t believe I’ve made it this far. And, you don’t notice it right away, but eventually you will. Eventually you will and you’ll realize that there’s something bigger out there. I can’t describe it. It’s different for everybody. But there’s something bigger out there and we’ll figure that out.

Question: And you feel you’ve had that discovery here at Jesuit?

Question: How are you feeling about being inducted into the Hall of Fame?

Answer: Well, incredibly humbled and just honored to be in the same group of people that I am a part of . You go down the hallway, look at the pictures of the people that are in the Hall of Fame. One of the first inductees is Len Casanova. He was a former football coach at the University of Oregon. I met Len Casanova years and years and years ago when I was a freshman in college, and to be in the same group with him and all of the people on that wall that all have their own story and they’re all incredibly talented, I’m just honored to be part of it.

Question: Another question I would throw at you is with Mr. Ulring singing your praises at the luncheon, really being that friend that you found at Jesuit and it sounds like you two met each other when your kids were in school together, what does that friendship mean to you and how have you seen it develop throughout your time here at Jesuit?

Answer: Well, first of all, we have more fun than we’re supposed to have. Richard is the person who sort of got me involved in doing the public address for basketball. The first thing I ever did with regard to public address was a football game at Jesuit filling in for Rich, and we had talked about it like years before when our kids were playing CYO football. Rich just said if you ever thought about doing public address, and I said, well sure, I’d love to do it. I’d done it before and just whatever you need. This was before my kids were going through the process of becoming a student at Jesuit. They were at St. John Fisher at the time. I think they were in seventh grade. So I had some time to think about it, but I filled in for Rich even before my boys were here. And so that kind of got me started and then, when the boys got accepted to Jesuit, I just kind of fell into it and just kept doing it. There was a gentleman doing varsity basketball who decided that he wanted to move on, so I was able to move right in. I filled in for him when he couldn’t make it and then once he left that position, I moved right in and I’ve been doing it ever since. But, Rich’s a wonderful, wonderful mentor to me. We bounce ideas off each other. It’s a great friendship and one I cherish.

Question: With all that experience of doing JCTV being an announcer, what do you now take into this mentorship position? You’re still announcing, but how do you work to pay that forward?

Answer: Well, I use my experience sort of as a roadmap. And I try to encourage each individual to develop their own style. It’s okay to steal stuff from other people but develop your own style. And I always try to raise the bar. You know, I want the kids to learn from behind the camera, in front of the camera, doing all kinds of things that relate to the broadcast because the more they understand of what it takes to put on a broadcast, the better off they’re going to be and the more respect they’re going to gain if they choose to be in front of the camera. It’s really nice to know the hard work that the people behind the camera have to go through. To me, I just like to use my experience to let them know that, here’s some things we can work on, here are the things you’ve done magnificently, and let’s take those things and just develop and become a better broadcaster from one broadcast to the next and that’s all we want to do. We don’t want to make the same mistakes twice. Nobody does. Sometimes there’s technical problems and those happen. How do you get around that? That’s the key. So yeah, I mean, it’s just a matter of using my experience and just sort of adapting it to what I’m doing in terms of JCTV and knowing full well that for some of these kids, this is brand new, which is great. And that’s why I think this year with the club being what it is. We’re bringing in all kinds of fresh new people and people that want to learn and they’re just like sponges and they’re just soaking stuff in and so it’s just been great.

Answer: Again, the whole thing, every time I think about it, I get sort of emotional in a sense because it’s hard for me to put my arms around the gravity of the whole thing. It’s a magnificent award, one that I had never expected. But it’s happened, and I’m just thankful that the work that I do here is appreciated.