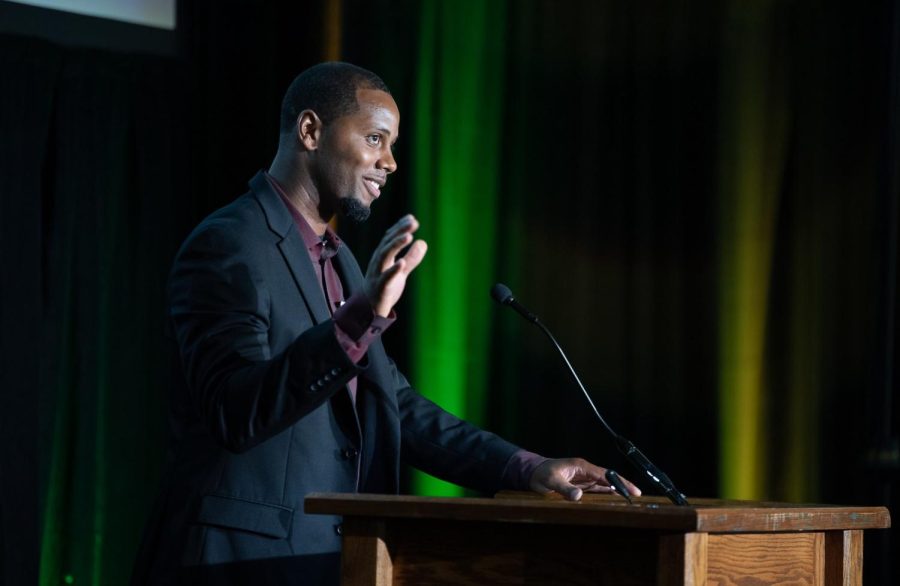 Seth Tarver ’06 speaks about being inducted into the Hall of Fame.

Question: What was it like being part of the state championship team in 2005 with your brother, Josh?

Answer: Yeah, that was a great experience. All the way to the end. The game was against Lake Oswego, and they had Kevin Love, who’s in the NBA now. Actually, he was National Player of the Year. He was really good. He’s a good friend of mine as well. But we were down like 17 and halftime and we had this crazy comeback to win it, but we only lost one game that year so we were a good team. And we were facing adversity and we came back to win so it was very special, but the ending was the cream of the crop. That year was great because it was my brother. Actually the year before we were actually a more talented team, but we didn’t win at all. We just didn’t have the right mindset. But the ‘05 team had the right mindset. Very talented, still. I have to say, I can’t really take credit. I gotta give credit to my brother and the rest of my teammates during that time because I actually fouled out of that game.

Question: Well, it’s all about the team coming together and picking each other up, right?

Question: What lessons did you learn here from both your academic and athletic career? And how have you used what you’ve learned beyond high school?

Answer: It’s a big question. I can tell you a lot. So to me academically, personally, I really learned how to write here. Even though people say, this is a tough academic school, you don’t realize how ahead you are until you get mixed in with other kids at college and stuff, too. So a lot of kids at college didn’t really know how to write as well as I knew how to write because of my teachers here. Specifically, I had a teacher named Ms. Festine who taught me to write really well. I don’t know if she’s still here or not. I don’t think so. But learning how to write academically, like you’ll be in a good place wherever you go next. Athletically, I’ll say things here are very consistent. And consistency, you don’t realize until you get out of here. The coaches are here on time, every time. Coaches that coached me are still here. There’s so many places where it’s like different cultures every year or people might be late or practice times are changing, people aren’t on time. But here it was like on time every time and you just knew what to expect and that’s what it was.

Question: What are you up to now and how have you used what you’ve learned at Jesuit in what you’re doing now?

Answer: Right now, I call myself a philanthropy consultant. I work with some nonprofits, and, basically, I work in between nonprofits and corporations or organizations. Here we’re taught and we did stuff to serve in the community like the Christian service project and the canned food drive or the Thanksgiving delivery. I think that a lot of my work is doing those same things. For one, this is a fortunate school, and we’re taught to give back to people that don’t have as much, so I still carry those things with me. Because the resources are there and honestly it’s just about sharing if you ask me. So just providing a platform for people to share their resources, whether that’s time, money, just your presence is the most valuable thing you can add. Just sharing those things with people that don’t have as much and helping them get in a better situation. I learned a lot of that in life and here, and that’s a lot of what I do now.

Mr. Potter, a math teacher and men’s basketball coach at Jesuit, coached Seth. He shared his memories of Seth and his thoughts on his induction into the Hall of Fame.

Question: What was Seth like as a player on your team?

Answer: Seth was the consummate team player. He cared more about how our team did than how he did. Individually, he was an outstanding player who elevated the play of all of his teammates, which gave us the best opportunity to be the best team we could be.

Question: What impact did Seth have on his teammates and on yourself?

Answer: It’s easy to coach when your best player is your hardest worker. So his work ethic really carried over for the entire program at that point in time because everybody looked at him to see what do you do to get better and they would follow his lead. And again, like I said before, just his ability to elevate the entire team. I mean, he knew how to make the right basketball plays and he was such a willing passer. He led our team in scoring, but he also led our team in assists. So he was not only able to take over a game and kind of individually offensively but he made our teammates better players.

Question: How do you feel about Seth being inducted into the Hall of Fame?

Answer: I think it is certainly very, very deserving as a multi-sport athlete, being an outstanding track athlete as well. We’ve had tons of very good basketball players of course, but Seth’s ability to do it in multiple sports, just made him a great hall of fame nominee.

Seth now works for the Thompson Family Foundation in the Bay Area.