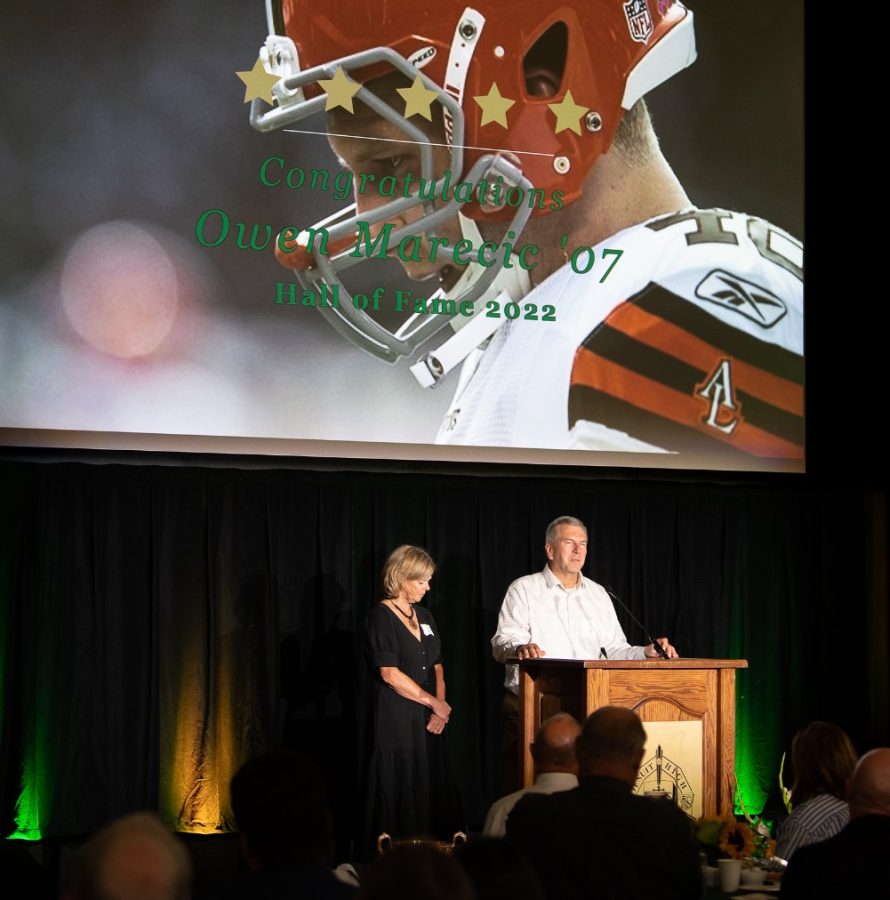 Jeff and Mary Fran Marecic speak on Owen’s behalf at the Hall of Fame Luncheon.

Owen Marecic ’07 was part of Jesuit’s state championship football teams in both 2005 and 2006. He was the league and state Defensive Player of the Year and Second Team All State in 2006.

Owen attended Stanford University after graduation, studying human biology and playing football. He played both as a fullback and a linebacker, averaging 110 plays per game. Owen scored two back-to-back touchdowns in a game against Notre Dame within 13 seconds of each other. He still holds that record in the NCAA.

Owen brought just as much passion and talent to his studies as he did to football, maintaining a 3.9 GPA while studying human biology with a focus in infectious disease. Owen played professional football for two seasons after college and is now completing his residency for Orthopedic Surgery at Stanford Medical Center.

Unfortunately, Owen was unable to attend the ceremony because of conflicts with his patients. However, his parents Mary Fran and Jeff Marecic answered some questions about Owen’s time at Jesuit, researching human biology, and what the Hall of Fame means to all of them.

Question: What did sending Owen to Jesuit mean for you guys?

Jeff: Well, he always refers back to his time here at Jesuit just in terms of the community that was built here, the goals that the school sets for him, but he also always talks about relying on his classmates and teammates. The community that is built around Jesuit shaped his heart and who he has become. And then transferring over to Stanford, he’s very team oriented. And he’ll tell you if he was here, that his success really relies on his relationships, his teammates, his friends, his teachers, his coaches, the Jesuits, absolutely the priests.

Mary Fran: And community, I think more than any real accomplishment, it was being with people preparing for that event. Whether it was sports or a paper or project, working with others together really that’s his happy place, working with other people to accomplish something.

Jeff: Or practices for games and workouts. Getting ready to do the thing, right? It’s not just showing up for the day. It’s a process that he went through to prepare himself to do the best he could for whatever it might be, the football game, a final exam.

Mary Fran: The expectation that you work your hardest was the thing here at Jesuit, and as a parent it was so nice to have that. And I think both of our children who went here really strive to do the best that they can in anything that they’re doing. And I think the expectations started here and it was accepted and they were with like minded people and I think that really has helped them throughout the ups and downs in their adult life.

Question: With Owen’s pursuit of human biology and his intensive research, what has that been like to observe and for him as well?

Jeff: To observe it is difficult for us because he would call us when he was writing a paper or doing the research and most of the words that we use in those days… But, but what kind of really resonated with me was that since he did played football, was in  locker rooms, he always noticed a lot of the players after the game they were sore or hurt and he was thinking about, “how can I help them?” So that’s what started some of the research that he did in the lab getting interested in how bones heal and that’s led him to be an orthopedic surgeon today because he wanted to find a way to help the players that he knew needed some kind of help. So that’s kind of was part of his drive. When he decided to retire from football and pursue his medical degree, so his research in the lab, which we can barely understand what the paper’s say to where he is today is that he really fulfilled that goal. Yeah, he’s in a very happy place right now.

Mary Fran: What’s special is that he can give quality of life back to people. So when in surgery, it’s almost instant. I know people go through a lot of pain and discomfort afterwards, but he can improve their quality of life right away, so he sees almost an immediate impact. Whereas in other fields of medicine, it takes a long time, so that kind of response makes him happy.

Question: I love that sports is the foundation he is building off of. It’s really amazing and probably even more amazing to witness. Do you have any closing remarks?

Jeff: The impact Jesuit had on his life, again, really helped mold him into who he is today. Hopefully the new incoming freshmen will get that as they move through the years because it’s difficult at first. It’s difficult to be held to a higher standard with those kinds of goals set in front of you and being accountable for those kinds of things. It’s tough to get started. But once you get through your second, third and fourth year, it becomes part of who you are, and that’s very obvious that when they leave here when they leave here that carries over into their adult lives.

Mary Fran: The enthusiasm of the students is so fun to see that it carries through and that it continues and the mission and the good things coming out of Jesuit. It’s just a happy day.

Mary Fran: One Crusader at a time.

Mr. Potter, a counselor and head football coach here at Jesuit, spoke on Owen’s incredible humility, talent, and his induction into the Hall of Fame.

Question: With the Hall of Fame ceremony last week, did it bring back any memories of Owen and your team when he was there?

Answer: Owen was one of the hardest workers of anybody I’ve ever been around and extremely humble. He was very talented. He was a really good leader, but very quiet. He liked to observe rather than say a whole lot of things, but his attitude on the field and his work ethic were contagious and he made us an excellent football team because of his leadership.

Question: What impact did Owen have on his teammates and on yourself?

Answer: His teammates can always look at Owen and see how to do things right because he was always doing that extra little bit of work. He was in the weight room all the time making sure that his body was stronger and prepared to play the game of football. Nutritionally, he ate correctly and took care of himself, and then academically, he was one of the brightest students we had at the school. His work ethic in the classroom was just like that on the field; it was second to none. So he just demonstrated that by being that kind of a leader.

Question: So he really led by example, right?

Answer: Yeah. He did. We talked a lot about being a servant leader. And he was one of the servant leaders because he would make sure that locker room was picked up, that things were done, and he would do it with no fanfare and didn’t want anybody to even know about it. He would just make sure it all got done.

Question: What do you think of the work that Owen’s doing now? How does it feel to see the person he’s grown into?

Answer: I couldn’t be more proud of who he is. What I said at the banquet was very true that he tried his hardest to be here. He tried to get somebody to cover for his patients and that kind of stuff. And the bottom line at the end was, this was a personal glory that he wasn’t going to come to that would give up on the patients that he was working with, and making sure that they were okay. They were much more important than any personal glory that he got, and that same thing happened when he played football for us here. He diverted all of the recognition to somebody else because he didn’t want to take it, because it wasn’t about him. It was always about the team and about others, and he continually did that. And he’s still doing it today.

Question: Do you have any closing remarks about Owen?

Answer: One of the things that was interesting is at the assembly and even in the banquet, they talked about the record he has in NCAA of scoring two touchdowns in 13 seconds. And one of the things that he wasn’t here to say but his dad said, that when Owen is asked about that record, he says that record is not mine. He says the record is that we had a really good football team at Stanford. We drove the length of the field, and I scored a touchdown. But it wasn’t me, it was our team that scored a touchdown. And then 13 seconds later, our defensive line made the quarterback throw early and he threw a bad pass that happened to come to me and I scored another touchdown, but that wasn’t me scoring the touchdown, that was Stanford scoring the touchdown. So the record should read, Stanford scored two touchdowns in 13 seconds. It shouldn’t read Owen Marecic scored two touchdowns in 13 seconds.

Question: Gosh, that’s really amazing. The humility is so amazing. I just never heard of someone like that.

Question: That was in college when he was researching?

Answer: After he got out of college, he went and played pro football for three, four years. He went back to Stanford and went into the medical research area and he did that for I think, three or four years, maybe five years, and then, he decided to do his residency and become a doctor to become an orthopedic surgeon.