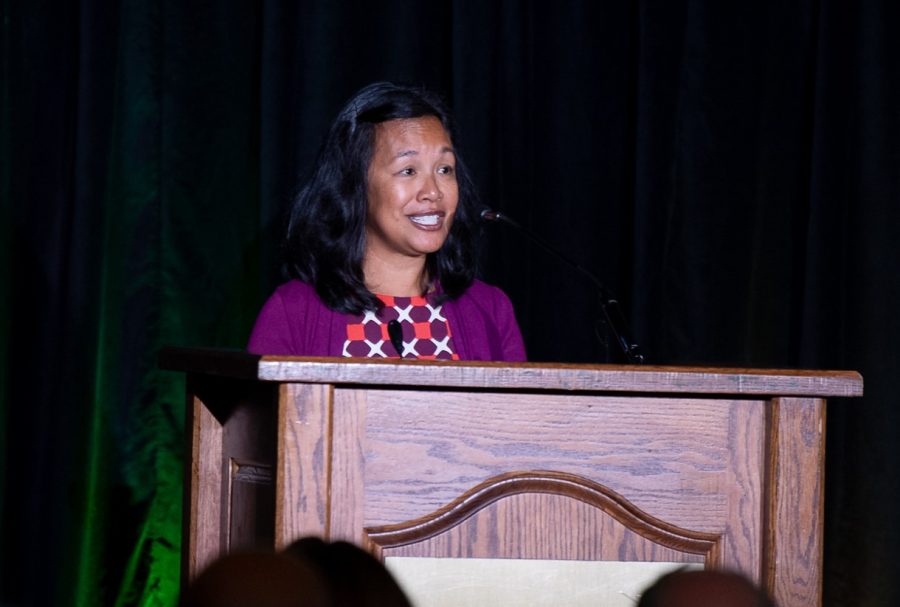 Ms. Kathy Baarts speaking at the Hall of Fame Luncheon.

Ms. Baarts opened up about the importance of the Jesuit Hall of Fame, the process of choosing the inductees, and what went into planning this special event.

Question: What is the Jesuit Hall of Fame and why is it so important?

Answer: The Jesuit Hall of Fame started in 1984, and it historically has been specifically for athletics, but there was a period of time where Father Hayes had included other aspects of the community. We did decide to move it back to strictly athletics because we have different opportunities to recognize Alumnus of the Year or through other alumni awards that are presented at graduation. But the Hall of Fame is important just to recognize the history and the tradition of those that have come before us. We tend to stand on the shoulders of those that have come before us. But, also to recognize the accomplishments of people that had amazing, extraordinary talents and gifts in their high school career and went on to use them in college and then just see them continue to utilize them in the lessons learned through their athletics in the world and what they’re doing today.

Question: What made this year’s ceremony so important?

Answer: With this year’s ceremony, it was momentous in a couple of ways. We’ve gone through a lot in the last few years, so to be able to bring people back together was wonderful. It would say the commonality for all of the six, the team, contributor coach and the three individuals, I think the common denominator with all of them would be just in their humility. There was so much gratitude in their acceptance, but then also, the next question was “why me?” It was interesting just to walk with them on the journey of where they were as a high school athlete, and then in college and then beyond, and see the continual ties of our mission and giving back. Whether it’s Brenner giving back to Jesuit in particular, seven years as an assistant coach, or Seth Tarver, giving back to a nonprofit in the Bay Area that continually looks to the underserved and how we continue to provide resources. Or Owen in his realization of how athletes and their injuries can really affect not only their playing career, but their lifestyle, because, in a professional position, his job is to ask how he can continue to give back in his research to get people back into what they’re doing quicker. Everybody is so focused on how can [they] take all of [the] lessons learned, through Jesuit, through athletics, just through the transformation that happens in their four years and continue to touch people in our world. So I think it’s always so much more than athletics. Jesuit High School has so many amazing things, but it includes community and its service and mission. And each one of them has woven it into their lives moving forward.

Question: Just for clarification, how long did this process of choosing them take and who made that decision? Was it the Board of Trustees? Was it a collection of teachers? How did that all work?

Answer: We started in November of 2021. There is a nomination form that goes out to all of our communities. It’s parents, alums, friends of our community, and anybody can nominate and the nomination process is a few months [long]. And then, after that, we take all the nominees and we look at historically people that were nominated in prior holding committees. It’s important for us to make sure as we’re moving forward, that we’re looking at everybody historically from 1960 on. It’s very hard to go back once we’re in the 2000 period, just because there’s so much talent. But talent in a 1960 team is very different from a 2000 team or a 2020 team. So, you know, there’s a lot of discernment in looking at everything that was brought to the table. And then looking at all the contributions with a selection committee, we go through and everybody is assigned a few people to research and we bring it all together. And then from there, it’s narrowed down and then we do additional research, and then bring it back to the table again. And then, there’s a voting process. Once the voting process is done, it goes to our president and he can select how many individuals and teams and coaches and contributors that he would like to represent and then he turns it back over to my office and then we move forward with the acceptance and all of that planning to make last week happen.

Edited from an earlier version to clarify comments from Ms. Baarts