Daily Coronavirus updates: what you need to know 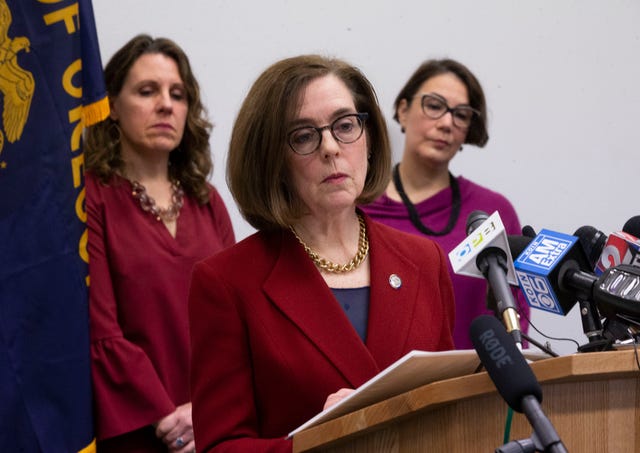 Oregon Governor Kate Brown is routinely updating Oregonians on latest extraordinary measures the state is taking to prevent the spread of COVID-19.

Curious about the latest news on the COVID-19 outbreak? Check here for recent developments regarding Oregon and the U.S.’s response to new cases, as well as Jesuit’s efforts to keep students safe and proceed with a prolonged period of Digital Learning Days. 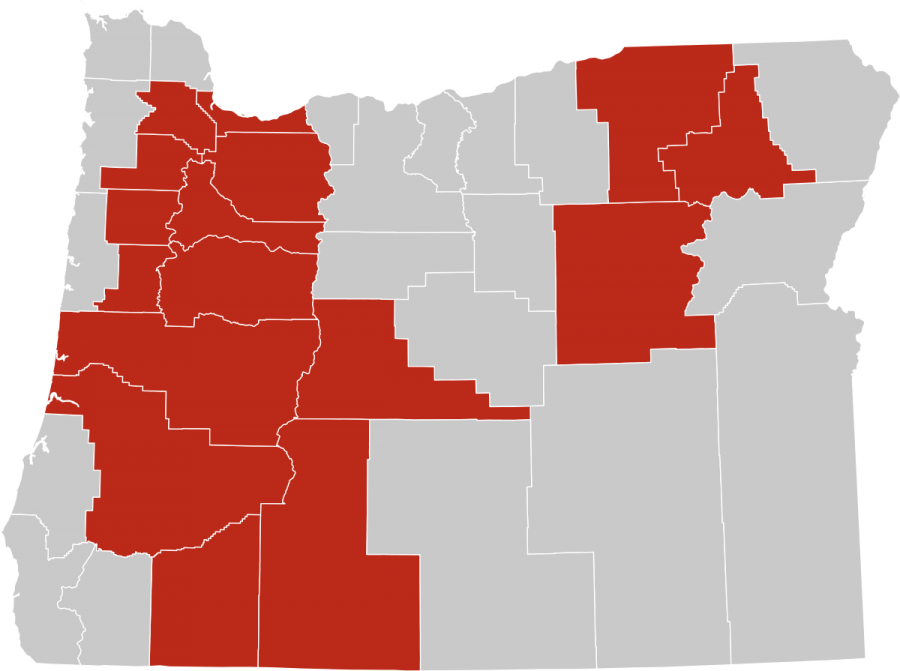 Most of Oregon's most densely populated counties have recorded at least one positive case of COVID-19.

School updates: Throughout the week, Jesuit’s administration has sent the student body daily videos of various faculty members with a message for the day. Sometimes the video encourages us to get out and exercise, and other times it’s just a fun, entertaining clip.

To connect students during this time of isolation, student government and the counseling center have sent out an announcement giving students daily challenges while in quarantine. Yesterday’s challenge was to send in a self-timer photo of students digital learning or social distancing. Student government will choose pictures students submit and post them on Jesuit spirit’s Instagram page. Today, the counseling department sent out a list of to-dos in taking care of one’s mental health.

World updates: On Thursday night, California Governor Gavin Newsom ordered California’s 40 million residents to stay home for an indefinite period of time, enacting the country’s largest lockdown as U.S. cases of COVID-19 now number over 15,000. California residents may still leave their homes to purchase pharmaceuticals, groceries, and healthcare, as well as for essential work commutes. Any further travel is now a misdemeanor under California law. Newsom has publicly predicted that 56% of Californians will contract or test positive for COVID-19 over the next eight weeks without proper resources and extraordinary preventative measures such as the lockdown.

Congress continues to chip away at a stimulus package now projected to significantly exceed $1 trillion, with Democrats adding their own must-haves in four bipartisan working groups that convened in the Senate on Friday. Democrats, including Senate Minority Leader Chuck Schumer and House Speaker Nancy Pelosi, have called for unemployment insurance that guarantees laid off workers receive close to their full salaries, as well as a so-called “Marshall Plan” for hospitals. Senate Majority Leader Mitch McConnell has urged senators to reach agreement by the end of the day today so that the Senate can begin drafting the bill Saturday and potentially have a final vote on the legislation Monday. 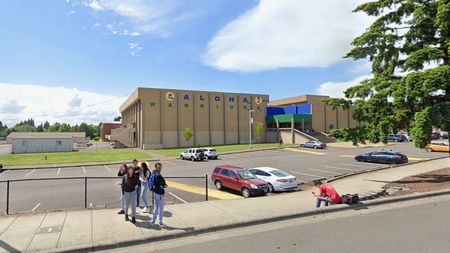 An Aloha High School student has tested positive for COVID-19 and attended school while infected.

In aid to some student’s potential anxiety, depression, isolation, or loneliness during this time of quarantine, Mr. Clarke and Mrs. DeKlotz encourage students to send “points of hope”, which could be anything from a song, work of art, or a meme. Mr. Clake places these “points of hope” at the end of his examen emails each day.
World updates: Yesterday, the Beaverton School District and the Washington County Health Department reported that a student at Aloha High School tested positive for COVID-19 and was at school while sick the week of March 9. The Aloha High School case marks the first of only two cases reported in Portland metro area public schools and is the first case where a student has been infected. Washington County now has 23 cases of coronavirus, the most by far in Oregon, which only has 75 confirmed cases total as of Wednesday.
Several states have already announced that they will either not re-open schools for the rest of the school year or they will not make up missed school days due to COVID-19. Kansas is the only state so far to officially declare that its public schools will remain closed for the rest of the year, though the governor of California has suggested his state will follow suit in coming days. Florida cancelled all tests and grades for the rest of the year, while Arizona has said that it will not require school districts to make up school days in the summer.
In Washington, the race to provide economic relief to workers and families impacted by COVID-19 continues, with Senate Republicans unveiling a 250-page, White House-coordinated proposal that outlines the specifics of the direct payments to Americans, as well as hundreds of billions of dollars in small business and affected industry loans. The Republican proposal offers $1,200 cash payments to American adults who make $75,000 or less individually, as well as an extra $500 per child. It also offers $208 billion in loans to industries such as airlines and $300 billion in loans to small businesses, which are forgiven if they retain all employees on payroll. Democrats have suggested, however, that they want a seat at the table, and adjustments will need to be made to the package to secure bipartisan support.

Students receive daily copies of the planned Examen prayers in order to continue Jesuit's tradition of reflection and contemplation.

School updates: As of today, Jesuit is extending digital learning until April 28th, tacking on an additional month of online learning. Both April encounters are suspended until June, and Grandparents Day is canceled. Spring sports are also deferred until school reopens.
Students also may have noticed Mr. Clarke still making an effort to allow students to stop and reflect everyday through the Examen prayer. Each day, Mr. Clarke sends the school an email with reflection prompts guiding students and faculty through the prayer.

World updates: As of Wednesday morning, there are currently 68 cases of COVID-19 in Oregon, a steep increase from Sunday’s count of 39 total cases. In response to the uptick, Gov. Brown has extended the closure of all public schools until Apr. 28, which Jesuit has followed as well.

In federal news, President Trump and Canadian Prime Minister Justin Trudeau announced the suspension of all non-essential travel between the two countries to contain the spread of the virus. While the temporary suspension’s timeline is still being hammered out via joint agreement, essential travel, particularly supply chains that involve the trucking of food, medicine, and fuel across the U.S.-Canada border, will be exempted from any border closure.

The Senate also passed the $100 billion House bill to provide paid sick and childcare leave, expanded unemployment insurance, and free coronavirus testing. That bill now heads to Trump’s desk for his signature. Senate Republicans are now working in coordination with the White House on a much larger, $1 trillion-plus package–known as “Phase 3”–that lawmakers and Treasury Secretary Steve Mnuchin have suggested will provide $2,000 to individual adult Americans in separate $1,000 cash installments, with a cutoff at some point and lesser, fixed amounts for wealthier Americans. Other details of the unprecedented economic stimulus proposal, such as small business loans and affected industry relief, are in the midst of negotiation. 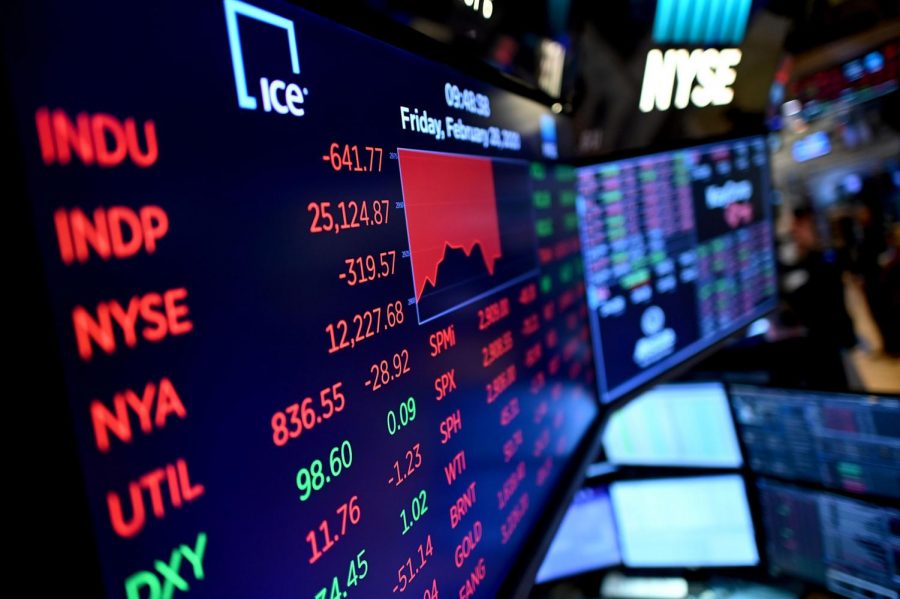 The Dow Jones rose roughly 1,000 points on Tuesday, a result of bipartisan support in Congress for a massive economic stimulus, after a week of intense volatility.

School updates: Alongside teachers who are trying to ease students around the tension of this new type of learning, counselors and librarians are trying to help students adjust to online learning by offering their own office hours as well. Additionally, Ms. Tormala and student government sent out a Google form allowing students to ask general questions should one arise.

World updates: The Senate is currently drafting bipartisan legislation in coordination with the White House to address the spiraling economic ramifications of COVID-19. President Trump and Treasury Secretary Steve Mnuchin have proposed a roughly $1 trillion stimulus package to provide large-scale consumer and industry relief (Washington Post). The sweeping package would build upon a $100 billion spending bill passed by the House, which mandates employers with 50 to 500 employees provide 10 days paid sick leave to their employees, while also increasing funding for federal unemployment insurance and free COVID-19 testing (The Hill).

The additional $850 billion in stimulus spending will likely be directed towards providing broader relief to Americans impacted by the COVID-19 outbreak, particularly those with children and those with service industry jobs. Mnuchin and Trump have proposed $50 billion in airline industry relief, an attempt to ease tensions in a flagging, volatile stock market. Most significantly, the White House and several Senate Republicans, including Sen. Mitt Romney (R-UT) and Sen. Tom Cotton (R-AK) have signaled support for immediate $1,000 cash distributions to many Americans. While it’s unclear how many Americans will actually receive the payments, with Sen. Cotton suggesting that imperiled wage workers are the primary intended recipients, the bipartisan support for a temporary form of Universal Basic Income (UBI) represents a surprising development for Capitol Hill, where many members of Congress have been previously wary of the policy.

School updates: The spread of the Coronavirus sweeping the whole nation calls Jesuit into action. Starting this week, March 16th, Jesuit high school has decided to close down the building in attempt to reduce person-to-person contact. In doing so, students and teachers switch to online learning through canvas.

Teachers are expected to post their assignments for the day by 10 am so students have the rest of the day to complete them. The due date for all assignments is 10 am the following day.  In an effort for this week to run smoothly, teachers have set up various office hours, which is a set time block where students can email teachers with questions and expect a quick response.

World updates: In an effort to contain the spread of COVID-19, Governor Brown announced Monday that all restaurants and bars must close except for take-out and deliveries. She also banned gatherings of more than 25 people for at least four weeks, a significantly more restrictive measure than the ban she placed on gatherings of 250 or more last week. President Trump has also advised the country to avoid gatherings of more than 10 people.

Brown’s additional restrictions come two days after her Saturday announcement of Oregon’s first fatality due to the Coronavirus, a veteran in his seventies. As of Sunday afternoon, Oregon had 39 confirmed cases of COVID-19.