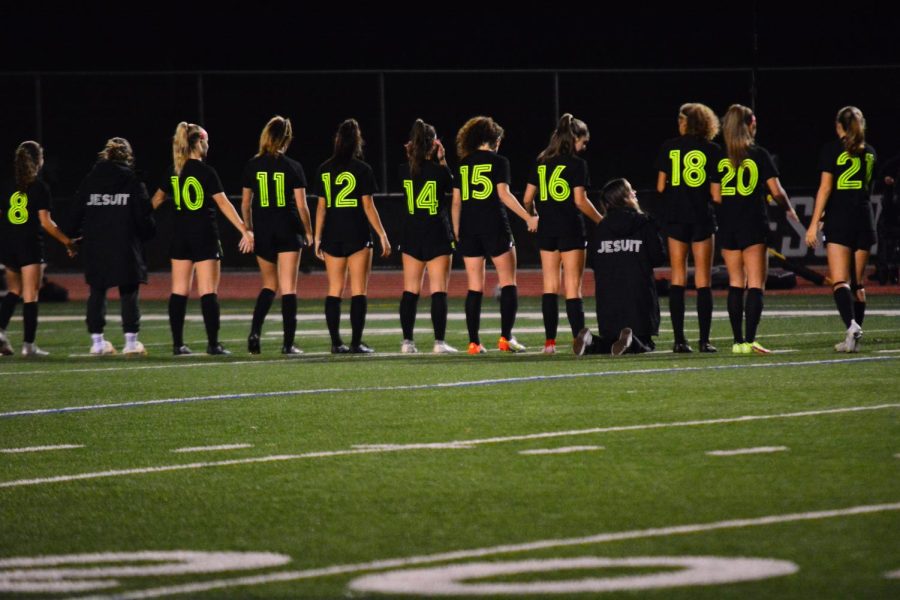 Women’s varsity soccer finished with a record of 13-2.

After dominating the 6A division over the past four years, Jesuit returned to fight for yet another state title. Coming off a shortened season due to the pandemic, it was clear that the team was ready to get back from where they left off.

“It was exciting,” head coach Steve Fennah said. “Usually at tryouts I talk about being aggressive and working hard. This year, I said that we were blessed that we got to play.”

Players also shared Fennah’s enthusiasm about having a full season.

“After COVID, it’s been so great to have a normal season,” junior Aoife Gish said. “To be able to do fun things as a team, have pre game routines, and wear jerseys at school on gameday.”

This year, there was an increased amount of freshmen on the roster. With 9 freshmen, this was a younger women’s team than Jesuit had put out in previous years.

Even with a younger squad, the Crusaders propelled themselves to a 7-game win streak, scoring 26 and only conceding 2. Their seventh game was a hard battle against Lakeridge, resulting in a last minute penalty to snatch a win.

“We have a fairly young team, so our main focus was to show what Jesuit is all about to the players,” Gish said. “At the beginning of the season, we were able to do just that.”

As the team began the Metro League, their first test was against undefeated Beaverton. The Crusaders conceded three goals, two in the first half, and were only able to grab one back in a 3-1 loss. This game ended Jesuit’s five-year unbeaten streak of 76 games.

Although it was a devastating loss, the team managed to find their feet and win the rest of their Metro League games. They finished with 11 wins, 1 loss, heading into the postseason. Two seniors, Taylor Krueger and Naomi Alvarez, were influential in grinding out wins.

“They were instrumental in providing goals and leadership,” Fennah said. “But it was also an all around contribution from throughout the team.”

When playoffs began, Jesuit had their eyes set on yet another state champion trophy. They set the tone in their first game, winning 5-0 against Central Catholic. In the second round, they faced a strong Forest Grove team. Coach Steve Fennah had high expectations of the opponents going into the game.

“We knew they were a good team,” Fennah said. “We also knew we were going to be inexperienced in these situations with a young squad.”

The game ended with an unfortunate loss in overtime, the Crusaders falling to the Vikings 3-2. They ended the season with 13 wins and 2 losses.

Coach Fennah will look to prepare for the future and fight for another championship next season.

“Many of the freshmen and sophomores got a lot of time,” Fennah said. “The future looks bright, and you always hope that they keep developing and improving for the coming years.”