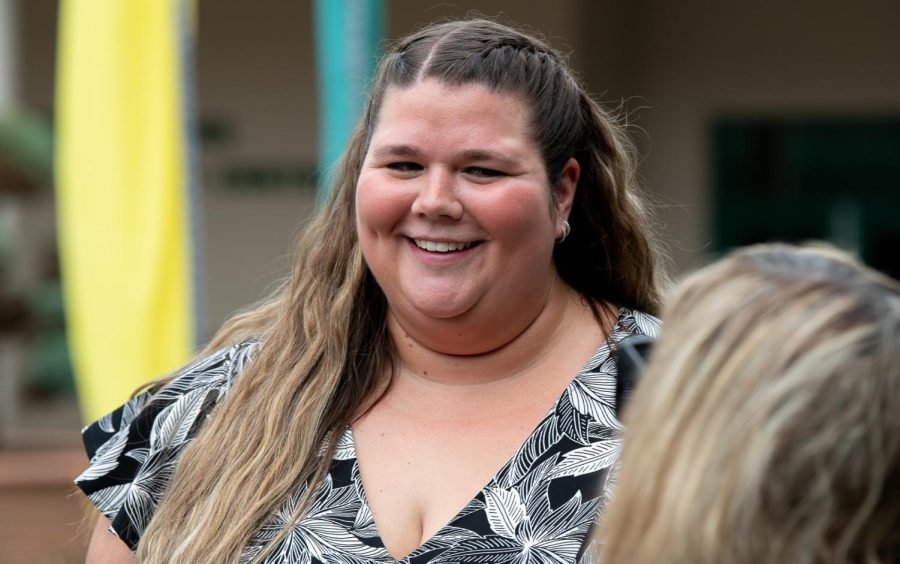 Elizabeth Brenner Kleffner catching up with other alumni before the Hall of Fame Luncheon.

She went on to play five sports at University of Oregon. She was recognized collegiately with the Bill Hayward Award for Best Amateur Female Collegiate Athlete in 2012, 2013, and 2014. She now works for Nike and as a coach for volleyball and track here at Jesuit.

Question: Can you tell us about your time here as a student at Jesuit? What were your fondest memories?

Answer: I loved going to Jesuit and I still brag about it to this day. I had the opportunity to participate in volleyball, basketball, softball and track while I was here, and I also loved all of the retreats that we did and I got to be a sacristan working with encounters so super fun. I just loved being a part of Jesuit and the Jesuit community and it’s truly such a special place.

Question: So obviously, you’re a very talented athlete. Lots of sports going on. How did you balance the academic and athletic sides of your time here in high school and then in college too?

Answer: Yeah, that’s a good question that a lot of people ask. I think from a young age, I always played a lot of different sports. And my parents were very structured on “okay, you have practice right after school today. We’re gonna go to practice who’s we get home, we gotta get homework then.” You know, we weren’t able to go and play or watch TV until we made sure we had everything finished and complete. So, I think that really carried over into high school. I’d go to practice. Then, I’d be on my way to my next practice in the car. I’d be doing my homework and making sure I was getting everything done. But it just comes down to being really organized. I had a lot of calendars to keep everything straight and everything like that. So yeah, good organization and time management and then also helps to have awesome coaches that will let you overlap season a little bit to be able to play multiple sports. Yes.

Question: How did you bring what you learned from Jesuit to your college career in both the athletic and academic side of it?

Answer: At Jesuit, you are expected and pushed to do the best that you can do and whatever it is, whether it’s sports or athletics or whatever you want to do. For me, those are my top two. And, you know, I just took that to college and to even my life now, like whatever I do, I’m competitive and I want to do well at whatever I’m doing. And I think it’s part of having that pride of your own work and whatever I do, I just want to be the best at it. And if I’m not, I’m gonna learn how to be the best at it. So I think Jesuit really helped instill that in me.

Question: And my last question for you is, how is it being an assistant coach for the volleyball team?

Answer: It has been so fun, and it’s really special because they coached me when I played here and now I get to be on the other side and get to be her right hand woman and help coach too. So getting the opportunity just to work with young adults and help share my knowledge of the game and my love with the game with them, I think has been super fun and it’s really cool to watch them grow. You know? A lot of these girls I get to watch from like freshman year to senior year and they improved so much. So it has been so fun. And I love it. And yeah, seven years and it’s flown by but it’s been

Ms. Zimmerlee, a P.E. teacher and the head volleyball coach, shared her thoughts on Elizabeth’s induction into the Hall of Fame. Ms. Zimmerlee coached Elizabeth when she was playing volleyball at Jesuit and now works with her daily as Elizabeth is now the volleyball team’s assistant coach

Question: What was Elizabeth like as a player on your team

Answer: Elizabeth was a dominating player in High School. She played as a middle blocker and could also play in the back row. She was quick and aggressive, and gave more than a few players the hard shot to the face. Elizabeth always worked to her full potential, and pushed her teammates to be better players.

Question: What is it like having Elizabeth as an assistant coach now?

Answer: Elizabeth is a very knowledgeable assistant. She brings a lot of insight to sets and matches. She pushes the players to perform at their highest level every time they step on the court, both in games and in practices. It is kind of funny that her and our other varsity assistant, Amanda Flores, were best friends in high school and now they are both assisting for the Jesuit Varsity.